Reality vs Obama: The Economy

Let us once again refer the the chart our Dear Leader‘s economic team used to scare people into buying into the miserable failure of a porkulus package the democrats rammed down the throat of America back in 2009.  Oh, but with reality also displayed. 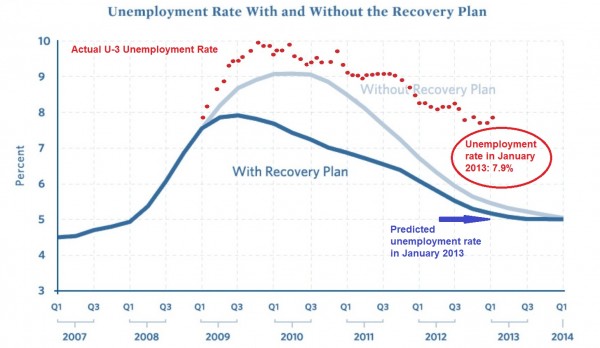 So, using the Obama regime’s own metrics, the so-called “economic policy” has made things worse for average Americans than doing nothing would have done!  They predicted an unemployment rate of 5.5% by now if nothing was done and 5.1% if the administration got to print more money and give it to democrat campaign donors.

The only reason the current U3 unemployment rate is is as low as 7.9% is that over eight million people have been removed from the labor pool that the feds use to calculate the employment rate.  That includes everyone in the obscenely high long term unemployment pool that have run out of the extended unemployment benefits.  The U6 rate, which includes the underemployed is still at 14.4%, which appears to be the “new normal” in Obama’s progressive dream of America.

James Pethokoukis points out that our Dear Leader‘s economic team made other really bad predictions.

…recall that back in January 2009 Team Obama economists Jared Bernstein and Christina Romer predicted the unemployment rate by 2013 would be closing in on 5%. (Of course, Obama’s economists also thought we’d be in a mini-boom of 4%-plus economic growth. That hasn’t happened either.)

In case you haven’t heard, GDP for the fourth quarter of 2012 came in at -0.1.  That’s right, after three and half years of the worst recovery since the Great Depression, the US has slipped back into negative GDP growth under the stewardship of our Dear Leader.  We actually could be in another recession, but we won’t know for another three months.  Until then, we’re in a Schrödinger’s cat situation of recovery/recession.

Given that our Dear Leader and his democrat minions are calling for more taxes, more government spending (with $0.46 on the dollar borrowed) and more business hindering regulations, it’s looking more like that cat is a recession.

2 thoughts on “Reality vs Obama: The Economy”