“When all else fails the liberals call you names or attack your personality.”

— Herman Caine on the Left’s “new civility”, which is pretty much like their old civility.

Seize the Day by Richard Marcinko and Jim DeFelice

Wow, the Rogue Warrior series is up to fourteen with this installment. It’s a good action yarn, and Marcinko like to remind you that he does have a Masters in International Relations and has more than “shooting and looting” in his world travels. In this book, he reminds that you sucks to be an average Cuban under Castro’s brand of Communism and that there are worse prisons on the island than the terrorist holding cells at Gitmo. My favorite in the series is still the first one, his autobiography written to pay his legal bills.

Jennifer Rubin nails it in this Washington Post article:

It’s dawning on many Americans that they made a bad hire. Obama was slick and seductive in the interview that stretched from early 2007 to November 2008; the competition was unexciting and, to be blunt, old. But it turned out he had no real job skills, didn’t get along with others, failed to translate rhetoric into action and became blinded by his own ego.

The lesson here is an existential one: Leaders are what they do. They become revered because they perform, understand their market, show creativity, deliver unexpected gains and beat the competition. The star quality follows accomplishments and performance.

Failure is never cool; lofty salesmanship without a solid product is annoying. Obama is forever “pivoting” and “resetting,” but the problem remains. He promises to roll out a “new and improved” job agenda, but the public anticipates it will be neither.

The closing line up sums up the failure of the MSM/DNC: “Maybe we should have checked references?”

Various bits from the past week or so…

Our Dear Leader‘s policies in the Middle East has made the “Arab Street” hate America even more then they did back when G.W Bush was President. No real surprise to anyone who was paying attention.

Someone please tell the part time adjunct professor of Constitutional law living at 1600 Pennsylvania Avenue that the President has to actually send trade agreements (and other treaties) to Congress before they can approve them.

The Obama Administration recently violated the ban on federal funding on ACORN.  Rule of Law never has been their strong point.

This is no surprise to anyone paying attention, but Obamacare is a disaster

More raw hate from the left

The Mainsteam media’s silence on operation “Fast and Furious” is growing deafening.

Andy at AoSHQ nails it shut:

Sir Golfsalot, from his vacation digs there in swanky Martha’s Vineyard, calls out Congress for not enacting his detailed plan to spur the economy? No, really. This is beyond parody.

But it’s pretty transparent, isn’t it? After getting nowhere blaming inanimate objects like corporate jets, ATMs and Japanese earthquakes, little Barack looked around for someone with a worse approval rating than his and settled on “Congress.” So you can expect to see much, much more of this tripe in the coming months.

As Ace has pointed out frequently, though, nobody votes for “Congress.” They only vote for their individual congressmen. So good luck with the Alinsky tactics there, Barry.

Run against Congress all you want, but everybody knows you’re a stuttering clusterfuck of a miserable failure. Since we all can’t live in Paul Ryan’s district, “congress sucks” isn’t exactly a newsflash to most of us, you preening jackass. From right here in MA-4, home of Barney Frank, I enthusiastically agree and look forward to giving both of you the boot in 2012

Yup, it’s been 20 years since this martial arts action flick first hit the big screen. As martial arts films go, it’s fairly typical. So-so script, typical revenge plot with a prodigal son twist thrown in for flavor, and a cast of regulars in the genre. This was supposed to be the big break film for American Kenpo master Jeff Speakman. Didn’t quite turn out that way, but the karate scenes are good and the rest of the cast (which includes Mako and Professor Tanaka), make worth the rental, if you can find it. 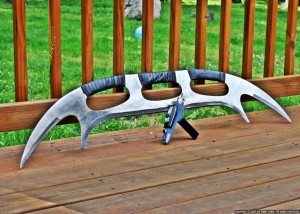 Yes, I own both of those.  No problem with Geek Cred here.

This is the same image I have loaded on flicker, just punched it up a bit.