This battle took place on the 30th of April 1863, during the campaign of Mexico. It is celebrated each year, on the anniversary of this date, by all the regiments of the French Foreign Legion.

History: The French Army was besieging Puebla. The mission of the Legion was to ensure the movement and safety of the convoys, over an 80 mile distance. On the 29th of April 1863, Colonel Jeanningros was informed that an important convoy was on its way to Puebla, with a load of 3 million francs, and material and munitions for the seige. Captain Danjou, his quartermaster, decided to send a company to escort the convoy. The 3rd company of the Foreign Regiment was assigned to this mission, but had no officers available. So Captain Danjou, himself, took the command and 2nd lieutenants Maudet, company guide, and Vilain, the paymaster, joined him voluntarily.

On the 30th of April, at 1 a.m., the 3rd company was on its way, with its 3 officers and 62 men. At 7 a.m., after a 15 mile march, it stopped at Palo Verde in order to get some rest. At this very moment, the enemy showed up and the battle began. Captain Danjou made the company take up a square formation and, even though retreating, he victoriously drove back several cavalry charges, inflicting the first heavy losses on the enemy . By the inn of Camerone, a large building with a courtyard protected by a wall 3 meters high, Danjou decided to stay, in order to keep the enemy and so delay for as long as possible, any attacks on the convoy.

While the legionnaires were rapidly setting up the defense of the inn, a Mexican officer demanded that Captain Danjou surrender, pointing out the fact that the Mexican Army was greatly superior in number. Danjou’s answer was: “We have munitions. We will not surrender.” Then, he swore to fight to the death and made his men swear the same. It was 10 a.m. Until 6 p.m., these 60 men who had had nothing to eat or drink since the day before, in spite of the extreme heat, of the thirst and hunger, resisted against 2,000 Mexicans: 800 cavalry and 1,200 infantry.

At noon, Captain Danjou was shot in the chest and died. At 2 p.m., 2nd lieutenant Vilain was shot in the head. About this time, the Mexican colonel succeeded in setting the inn on fire. In spite of the heat and the smoke, the legionnaires resisted, but many of them were killed or injured. By 5 p.m., only 12 men could still fight with 2nd lieutenant Maudet. At this time, the Mexican colonel gathered his soldiers and told them what disgrace it would be if they were unable to defeat such a small number of men. The Mexicans were about to give the general assault through holes opened in the walls of the courtyard, but Colonel Milan, who had previously asked 2nd lieutenant Maudet to surrender, once again gave him the opportunity to. Maudet scornfully refused.

The final charge was given. Soon, only 5 men were left around Maudet; Corporal Maine, legionnaires Catteau, Wensel, Constantin and Leonard. Each had only one bullet left. In a corner of the courtyard, their back against the wall, still facing the enemy, they fixed bayonets. When the signal was given, they opened fire and fought with their bayonets. 2nd lieutenant Maudet and 2 legionnaires fell, mortally wounded. Maine and his 2 remaining companions were about to be slaughtered when a Mexican officer saved them. He shouted: “Surrender!” “We will, only if you promise to allow us to carry and care for our injured men and if you leave us our guns.” “Nothing can be refused to men like you!”, answered the officer.

Captain Danjou’s men had kept their promise; for 11 hours, they had resisted 2,000 enemy troops. They had killed 300 of them and had injured as many. Their sacrifice had saved the convoy and they had fulfilled their mission. Emperor Napoleon the 3rd decided that the name of Camerone would be written on the flag of the Foreign Regiment and the names of Danjou, Vilain and Maudet would be engraved in golden letters on the walls of the Invalides, in Paris. Moreover, a monument was built in 1892, at the very place of the fight. The following inscription can be read there :

HERE, THEY WERE LESS THAN SIXTY
AGAINST A WHOLE ARMY
ITS MASS CRUSHED THEM
BUT LIFE RATHER THAN COURAGE
ABANDONED THESE FRENCH SOLDIERS
THE 30TH OF APRIL 1863.
TO THEIR MEMORY THE NATION BUILT THIS MONUMENT.

Since then, when Mexican troops pass by the monument, they present arms.

“The real reason liberals accuse Tea Partiers of racism is that contemporary American-style liberalism is in rigor mortis. Liberals have nothing else to say or do. Accusations of racism are their last resort.”

HP has been on a buying spree.  They bought 3Com, and now they have just purchased a former 3Com company, Palm Corp. for $1.2 billion.

The article I linked talks about what HP could do with Palm’s webOS for mobile devices, including using it in netbooks and tablet devices.

What it doesn’t talk about is Palm’s patent portfolio, which could be worth the price of the sale alone.

It’s been kinda content light here the past couple of weeks, but things have been a bit busy.

For one of those reasons, I’d like to give a shout out to the really top notch team as the Foster Hospital for Small Animals, which is part of the Tufts Cummings School of Veterinary Medicine.

They did some really amazing work with one of my Golden Retrievers.

Speaking of small animals, the cat is actually in the bag… 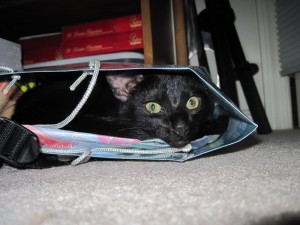 A very good book for the serious martial artist. A lot of history as well the basics behind various techniques and philosophy. It explains why there are no real Shaolin in mainland China anymore (the Communists were better at driving them out than the War Lords), and why you are better off going to the Chinatowns of San Francisco, New York City and Boston, to find real Shaolin Gung Fu than going to Communist China (where they have Tai Chi practitioners and WuShu artists in orange robes to bilk tourists of the their cash). 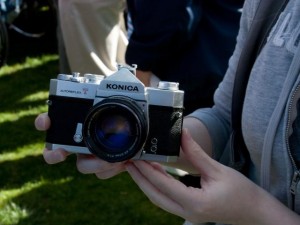 An actual Film Camera spotted in the wild! The person with the camera was taking a photography class, and some of her assignments required an actual film camera to be used.

Originally posted at Slices of Life

Yup, “Earth Day” is on Lenin’s Birthday.  Not a coincidence, given that the “founder” of Earth Day was much more a “Watermelon” than an actual environmentalist.

Watermelon: Thin layer of green of the outside, red to the core.

So, we are going to look back at some Lenin’s Birthday classics, including this clip from the late George Carlin.

“Civilization will end within 15 or 30 years unless immediate action is taken against problems facing mankind.” — George Wald, Harvard Biologist

“Population will inevitably and completely outstrip whatever small increases in food supplies we make. The death rate will increase until at least 100-200 million people per year will be starving to death during the next ten years.” — Paul Ehrlich, Stanford University biologist

“By…[1975] some experts feel that food shortages will have escalated the present level of world hunger and starvation into famines of unbelievable proportions. Other experts, more optimistic, think the ultimate food-population collision will not occur until the decade of the 1980s.” — Paul Ehrlich, Stanford University biologist

“It is already too late to avoid mass starvation,” — Denis Hayes, chief organizer for Earth Day

“Demographers agree almost unanimously on the following grim timetable: by 1975 widespread famines will begin in India; these will spread by 1990 to include all of India, Pakistan, China and the Near East, Africa. By the year 2000, or conceivably sooner, South and Central America will exist under famine conditions….By the year 2000, thirty years from now, the entire world, with the exception of Western Europe, North America, and Australia, will be in famine.” — Peter Gunter, professor, North Texas State University

“Scientists have solid experimental and theoretical evidence to support…the following predictions: In a decade, urban dwellers will have to wear gas masks to survive air pollution…by 1985 air pollution will have reduced the amount of sunlight reaching earth by one half….” — Life Magazine, January 1970

“At the present rate of nitrogen buildup, it’s only a matter of time before light will be filtered out of the atmosphere and none of our land will be usable.” — Kenneth Watt, Ecologist

Ok, Ehrlich was sorta right on this, if you restrict his predictions to modern Communist China, where they are showing the typical communist/socialist contempt for the environment.

“By the year 2000, if present trends continue, we will be using up crude oil at such a rate…that there won’t be any more crude oil. You’ll drive up to the pump and say, `Fill ‘er up, buddy,’ and he’ll say, `I am very sorry, there isn’t any.’” — Kenneth Watt, Ecologist

Now we get to my personal favorite, although probably not Al Gore’s…
“The world has been chilling sharply for about twenty years,” he declared. “If present trends continue, the world will be about four degrees colder for the global mean temperature in 1990, but eleven degrees colder in the year 2000. This is about twice what it would take to put us into an ice age.” — Kenneth Watt, Ecologist

Remember kids, there is way to get  Clean Energy and plenty of it

From the late 70s comes Chuck Norris’ first starring role. He plays a Vietnam Vet who’s unit was wiped out because politicans back home sold them out to the enemy. Years later, he gets his vengence! Bonus points for being Anne Archer’s first film role.

According to a recent Gallup poll, 63% of Americans expect their taxes to go up over the next year. Hot Air’s Ed Morrissey points out that this poll doesn’t target likely voters or even just voters, it’s a poll of the general adult population.  This not a good sign for the democrats.  If everybody is expecting their taxes to go up, that means the percentage is probably higher amount likely voters.

I’m betting that more and more Americans are identifying with the two unifying themes of the Tea Party protests, less government spending and a smaller government.

“What did you do to the cat? It looks half-dead.” — Schroedinger’s wife