Marty Lamb is running for the 3rd Congressional seat in Massachusetts 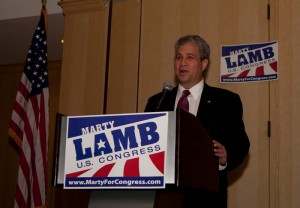 Marty Lamb is a Republican running for the 3rd Congressional seat in Massachusetts.  He had his kick off meeting in Westborough, MA on March 26, 2010.   There was a very good turnout of supporters.

Marty, unlike our current congressman, is not a career politician and has actually worked in the private sector.  He has a lot of support from the local Tea Party movement and believes that “government’s primary role is to preserve, protect and defend your God-given gift of freedom, not to micromanage your life.”

Update: I have some of my photographs from the event posted.  Some of the other local bloggers who attended were RightWing Granny and Angel Fleming. Christen Varley of the Greater Boston Tea Party introduced Marty at the event.

Update: Marty Lamb has a very different view of the government takeover of the American Health Care system than the incumbent democrat, James McGovern.