Our Dear Leader is not getting a warm reception in Russia. Very different than his campaign stop in Berlin, but then there was a free concert and free beer to draw the crowds there.

The Russian news agency Pravda had this to say about Barack Hussein Obama,

For once, Pravda is living up to its name.

If you have any doubts about how the Russian government feels about our Dear Leader, take a look at how Russian President Dmitry Medvedev greats the, ahem, so-called “Leader of the Free World.” 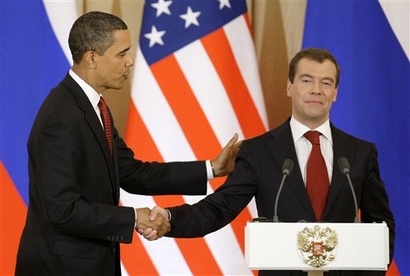 Clearly, the Russian government feels that Barry is a bigger chump than Jimmy Carter. They will be able to pretty much whatever they damn well please for the next three and half years, safe in the knowledge that BHO won’t lift a finger to stop them. In fact, they are counting on him rolling over and spreading for them when ever they snap their fingers.

Sadly, they are probably right.

Update: Chuck Norris sees a Obama/Carter connection as well. He isn’t as happy about it as the Russians are.

Further proof: During our Dear Leader‘s visit, Putin went out of his way to praise the hospitality and openness of former US President George W. Bush. Just his little way of pointing out that he doesn’t think very much of the current US President, Barack Hussein Obama.