Beware of Obama’s upcoming More of the Same

As noted before, our Dear Leader‘s economic policies, i.e. Keynesian economics theory that only really works in a classroom environment, has resulted in a noted and sharp increase in inflation, while doing little or nothing to spur real economic growth.

The lack of growth, is evident in these three figures pointing the change since our Dear Leader took office:

The source for these numbers, that tool of the Vast Right Conspiracytm, NBC News’ own “Meet the Press.” Oh, sorry, NBC is a decidedly left leaning News organization, so these numbers must be pretty damn solid in order for David Gregory to rub DNC spokesperson Rep. Wassermann-Schultz’s nose in them.

There is also this informative graph. 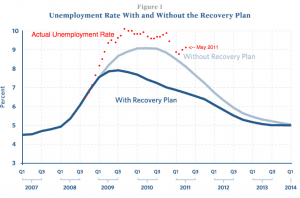 As you can clearly see, the affect our Dear Leader‘s economic policies have had is to make things worse than if he and the Congressional democrats had done nothing at all!  Also keep in mind, that it was in our Dear Leader‘s best interest to take the worst case scenario for the  “Without Recovery Plan” numbers in this graph.  Thus the odds are that if the federal government hadn’t done a damn thing, including not violating the rule of law and letting GM & Chrysler file Chapter 11 without making sure the UAW got paid off before the bond holders, the unemployment numbers would not only be lower than what they currently are, they would be lower than the “Without Recover Plan” projections the chart listed above.  Not just lower, but probably closer to the “With Recovery Plan” numbers, which I can see the Keynesian addicted White House “economists” considered their “safe” number projections for economic performance based on their years of classroom experience.

The the democrat’s so-called “stimulus plan” failed came as surprise to nobody who was 1. Paying Attention, 2. could do some basic mathematics, and 3. ever held a job in the real world.  Even if you take the White House numbers on faith, i.e “created or saved” jobs does not equal new jobs when you recount the same jobs as “saved” multiple times, the basic math doesn’t work.  Economic Policies for the 21st Century points out one of principle flaws.

[E]ven if you buy the White House’s argument that the $800 billion package created 3 million jobs, that works out to $266,000 per job. Taxing or borrowing $266,000 from the private sector to create a single job is simply not a cost effective way of putting America back to work. The long-term debt burden of that $266,000 swamps any benefit that the single job created might provide.

In the face of the obviously failure of their policies, what do you think our Dear Leader and the Congressional democrats are offering?  Yup, that’s right.  More of the same.  Yet another “quantitative easing” (i.e. printing money with nothing to back it, an inflationary tactic) is being planned.  Despite that the results of such a policy were clear back in March of 2009, when this cartoon was published.

Hmmm….looks like the nice men at Cox & Forkum nailed it right on the head with that one.  It makes one wonder, if the label on the outside of the box was our Dear Leader’s ultimate goal, and that he really didn’t care what the effect on the economy would be.  He knew that he wasn’t going to be bothered by it, as Mark Steyn pointed out:

“I’m not concerned about a double-dip recession,” Obama said last week. Nor would I be if I had government housing, a car and driver, and a social secretary for the missus. But I wonder if it’s such a smart idea to let one’s breezy insouciance out of the bag when you’re giving a press conference.

To use a phrase our Dear Leader is fond of, he just doesn’t have any “skin in the game.” He has never worked a day in his life in private sector economy and he never will. Prior to running for President, he managed to go $300,000 in debt on a family income of half a million dollars a year. Is there any surprise in the fact that he has done the same with the US economy?